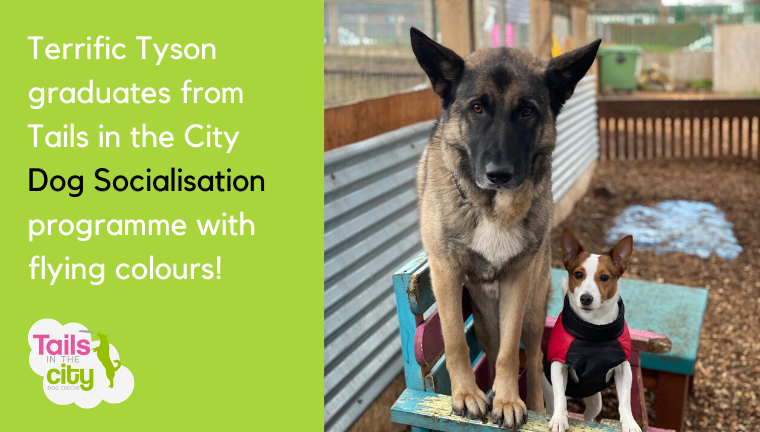 As many of you know, Tails in the City is more than just a dog crèche. We offer a range of additional services, one of which is dog socialisation. Occasionally, a dog joins us who struggles to get on with its peers. Our socialisation programme is designed to help these dogs gradually acclimatise to being around other dogs, make friends and enjoy themselves!

One of our big success stories is Tyson, who has been coming to Tails in the City for three years. Tyson is nearly four and is a German Shepherd Siberian Husky cross. (There may be other breeds in there but no-one’s quite sure. Because Tyson chewed up the testing stick when owner Jamie tried to use a DNA profiling kit on him).

Jamie came across Tyson when he was volunteering at the Dogs Trust. After the loss of his previous dog Scoobie, Jamie had vowed not to get another dog. However, on meeting Tyson, he changed his mind. You could say Jamie and Tyson were destined to meet at a point when they both needed each other. Jamie gave Tyson a new start in life, and in return, Tyson played a major part in helping Jamie overcome a period of anxiety and depression.

Muzzled and miserable around other dogs

When Tyson first came to Tails in the City in 2017, it was clear he had no idea what to do around other dogs. He was very scared, and more often than not, he would end up fighting with them. Consequently, he had to wear a muzzle in the crèche. And owner, Jamie, was convinced that there was no chance of socialising his pet. Besides that, poor Tyson was miserable, not enjoying life as he should be.

But over three months, Tails in the City staff helped Tyson get over his issues with other dogs. All thanks to our tried and tested socialisation programme. Slowly but surely, we introduced him to other dogs, by pairing him one on one with friendly, small ones at first. We’d put them together for short periods in partitioned areas of the crèche, supervised by staff giving plenty of encouragement. Bit by bit, as Tyson got used to being with one or two dogs, we increased the number of dogs in the group. His behaviour started changing over the weeks: he became calmer, less aggressive and more gentle and playful both with other dogs and with staff. By the end of the 3-month programme, we saw a transformation.

Today, thanks to the Tails in the City socialisation programme, Tyson is a soft, happy, friendly dog. He loves being around his canine friends at Tails. Not only that, he is particularly friendly and encouraging to small dogs. Furthermore, due to his gentle, friendly nature, he is one of the top dogs we use for our programme of supporting children who have canine phobias.

Jamie, Tyson’s owner, was thrilled with the results:

“It’s so rewarding to see Tyson playing with other dogs and enjoying himself. I had no idea he would ever be such a friendly dog. Taking him for walks used to be so challenging – meeting other dogs in the park would inevitably end up with him getting aggressive and me getting stressed. Now it’s a breeze, and he can even go off lead sometimes! I’m so grateful to Tails in the City for their support and expertise!”